It was his interest of diving in the tropical seas that first led Arthur C Clarke to Ceylon (now Sri Lanka). His first glimpse of the Indian Ocean island was in December 1954, when his ship SS Himalaya – taking him from London to Sydney, to explore the Great Barrier Reef – paused at Colombo Harbour for the day. He made contact with the leading Ceylonese diver Rodney Jonklaas.

Clarke returned to Ceylon in 1956 with fellow Englishman Mike Wilson for exploring the island’s cultural and natural heritage for several months. At the end of this expedition, he decided to settle down in the island (even though he kept travelling extensively on work till the 1980s).

When asked why live in Ceylon/Sri Lanka, he said, “The short answer is that I had had enough of 40 years of British winters!” He wrote several books giving the long answer, starting with The Reefs of Taprobane (1957).

Clarke soon became Sri Lanka’s best known foreign resident. For half a century, he played an active role in the island as a public intellectual and was engaged in promoting science, technology and higher education. He supported environmental and cultural conservation and was a patron of the arts. He kept out of local politics while maintaining cordial relations with all political leaders.

From 1979 to 2002, Clarke served as Chancellor of the University of Moratuwa, the country’s leading technological university.

Over the years, he received three national honours:

In February 1975, Clarke became a ‘Resident Guest’ under a new immigration category. However, he always remained a British citizen. 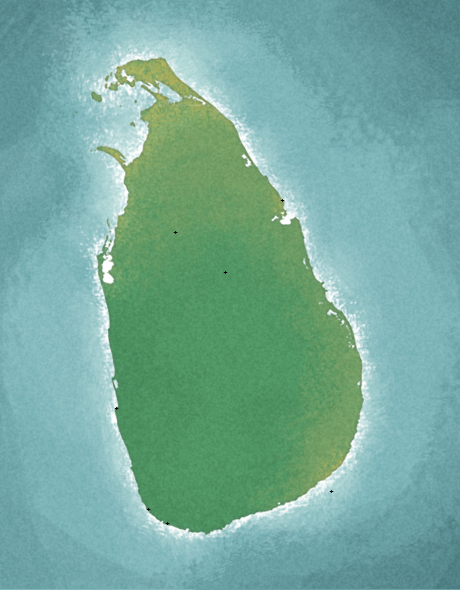 Sri Lanka’s commercial capital where Arthur C Clarke lived for more than half his life since settling down in the island in 1956. Among his favourite locations within the city were the Galle Face Hotel (where 3001: The Final Odyssey was completed), Colombo Swimming Club and National Museum.

Small coastal town, well known for its scenic beach, coral reef and surfing. Clarke’s Underwater Safaris diving company had a dive station here for many years – it was destroyed by the Indian Ocean tsunami on 26 December 2004.

Arthur C Clarke’s favourite beach was here. In 1960s and 1970s, he owned a house and spent long periods in this village, before tourism transformed it. Mentioned in The View from Serendip (1978).

Clarke was fascinated by the 5th century ‘Fortress in the Sky’, with its feats of ancient engineering and technology. In his 1979 novel Fountains of Paradise, Sigiriya features as Yakkagala (Rock of Demons). Clarke also selected Sigiriya as his “favourite place on earth” in a National Geographic Society book.

In March 1961, Clarke and fellow divers found an old shipwreck close to the British-built lighthouse on an offshore outcropping called the Great Basses Reef. The story of discovering this 18th century Indian ship carrying silver rupees is documented in Treasure of the Great Reef (1964).

This city was the capital of ancient Lanka for over a millennium, and is today a World Heritage city. Clarke was interested in the advanced hydraulic civilisation that once flourished with Anuradhapura as its centre. His 1957 novel The Deep Range features the chief monk of Anuradhapura as a key character. 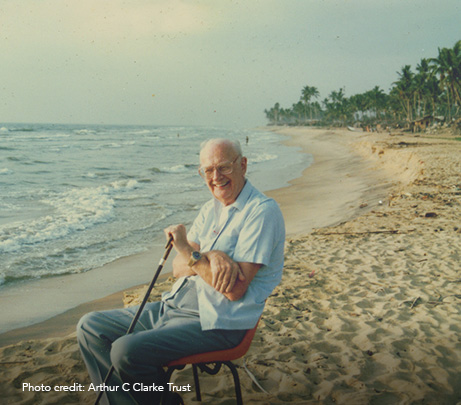 Clarke on his favourite beach in Sri Lanka